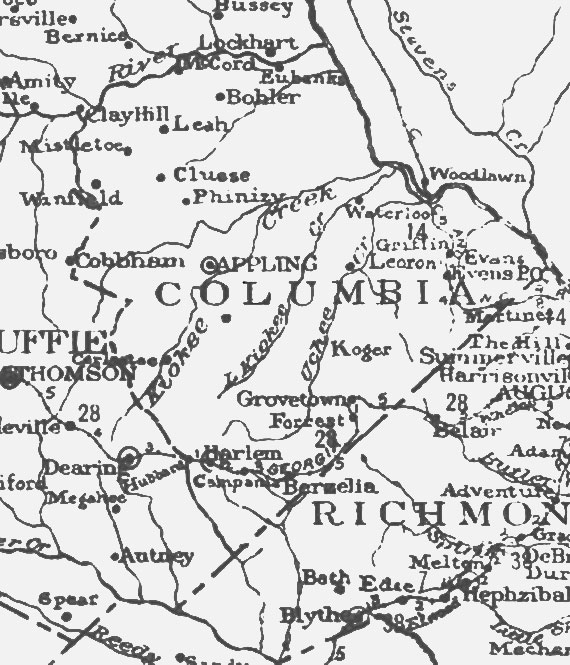 Is Harlem the New Grovetown?

The growth and expansion surrounding the quaint town of Harlem is astonishing. Growth is good. The question is, how can growth be encouraged and controlled? How can the quiet, hometown feel of Harlem exist with giants like Amazon and Club Car expanding on its borders?

Columbia County leaders are excited about the positive changes. Harlem City Manager Brett Cook gets to witness them every day. “Highway 221 off of I-20 all the way down to 78 is our primary growth corridor,” Cook says. “We are focusing on our downtown. The subdivisions that are sprawling out from downtown- gives us an opportunity to increase our tax digest and help our commercial corridor of the downtown area.”

Cook also knows that each part of Harlem has its own personality. Each area is being uniquely tailored to attract businesses to match that. “We do try to make sure that it fits in with the community, but that’s based on location,” he says. “If it is closer to downtown Harlem then we are going to be more restrictive with facades and making it fit in. If it is out off of 78 toward Ft. Gordon, then it is a little bit different. We look at the community character and try to plan different areas to accommodate different growth.”

Harlem is also meeting the challenge to stay in front of utilities, as Cook puts it. The city is getting ready to break ground to expand its water treatment plant. It’s a constant race to keep up with the needs of the business community and ever-rising numbers on the residential side. The population of Harlem has increased 35% since 2010. That means more tax revenue to fuel even more growth.

Driving down I-20 will look much different in the coming years as the Appling Harlem Exit exploded. Pumpkin Center convenience store will soon be competing with a new state-of-the-art Sprint Foods store. As industry like Club Car and Amazon move to the area, the pace of growth will continue to accellerate. Greenpoint is a residential development that has been in the planning stages for many years and is quickly coming to reality. This 1,200 Acre development will offer a community with a pool, walking trails, sidewalks, street lights, neighborhood parks, and natural areas. Robbie Bennett, Executive Director of the Columbia County Development Authority says a development of this nature will not happen overnight, but has been thoughtfully planned out. The attention to detail in the plans for Greenpoint help set the development apart from traditional neighborhoods. Robbie anticipates this project will have a long-lasting impact on Columbia County and Harlem.

The White Oak Business Park at I-20 continues to take off as well with Amazon coming. What more can we expect? Robbie Bennet says Club Car was the first tenant, setting the framework for the park. He says Club car has been a major asset to Columbia County. “The facility at White Oak employs nearly 100 people and is approximately 550,000 square feet. It provides support to their aftermarket products and their production efforts on Washington Road.” The combination of strategic location and planning for the park set the location as a great opportunity for White Oak Business Park’s newest tenant – Amazon, who announced in April 2020 their plans to build a new state of the art fulfillment center. This facility will be one of their largest and will bring approximately 800 new jobs.

With any growth and expansion comes growing pains. Traffic jams are all too familiar at the newest Columbia County boom Exit 190 in Grovetown. While Columbia County residents welcome the convenience of new grocery stores, retail and restaurants, they did not ask for longer commutes due to traffic issues. What is being done to alleviate some of the rush hour gridlock in the future? Robbie Bennett states that expansion at Exit 190 has been a major growth corridor for nearly 20 years in Columbia County. “With growth comes traffic. Anyone that has experienced this interchange has seen it first hand”. He reports that Columbia County leaders have worked hard to address these concerns in the short-term. Their efforts have paid off, however, the long term changes are still being planned and near implementation. Included in these changes is the widening of Lewiston Road to I-20, installing a diverging diamond on the bridge at I-20, and widening Horizon South Parkway from I-20 to Wrightsboro Road. These changes will reshape the landscape in this corridor.

Will Harlem face some of the same growing pains as Grovetown? Brett Cook thinks not. “Harlem is not going to face quite the challenges that Grovetown challenges. We are a little bit further from Fort Gordon and we are not going to have anything competitive to Exit 190. The Harlem downtown area is pretty defined. With Amazon coming and the new bridge we will have some commercial out there but nothing as dense as Gateway on Exit 190. We are thinking about transportation. We are currently working on getting a traffic light at the left turn lane on 221 South. This should alleviate traffic backing up on 221.”

So, is Harlem the next Grovetown? When it comes to growth and positivity the possibilities are endless. This special city already has a library, a museum, a brand new visitor center, and an ice cream shop to entice visitors to come downtown. Throw in a few new restaurants and Cook says this will be a destination spot for tourists. The entire region is ready for that. It’s enough to put a big smile on Oliver Hardy’s face as he looks down on his hometown’s transformation.